I had the pleasure of working with the TV production company Hat Trick again after I made this animated You Tube intro video for them in mid 2013. The team in charge of Hat Trick's You Tube channel, Bad Teeth, had a script written for a spoof explainer animation based on the existing series of Google animated videos. These animations have a distinct tone and a quirky corporate graphic style which Bad Teeth wanted to satirise. As I have a large portfolio of actual explainer animations, they approached us to animate the comedy sketch! 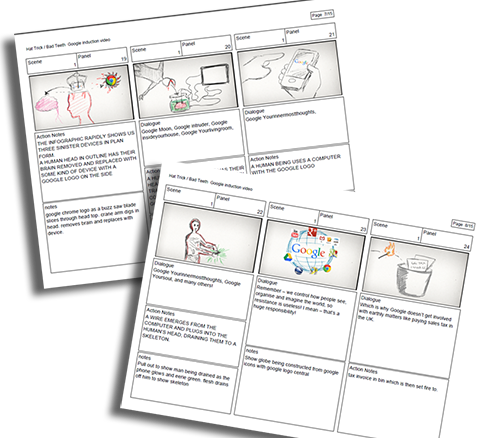 We started by putting together an animation style concept sheet based on the existing Google videos. Once this was nailed, I started storyboarding the comedy sketch script Hat Trick sent. After the storyboards were revised then signed off, Hat Trick arranged the voice over recording in their studio in Camden, London. Once the voice over edit was done, I started animating to it! The whole process took 5 weeks.

You can also watch the animation and subscribe to Bad Teeth on their You Tube Channel. It’s a UK comedy channel that takes a bite out of the web with twice weekly mouthful of celebrity-stuffed sketches, satirical swipes at internet culture, collaborations and web parodies.

Mair provided a hyper-efficient service, following guidelines meticulously to achieve high standard results with minimal notes required. Friendly, fast and fastidious, we very much look forward to working again with Mair many times in the future.