Earlier this year I was told off by Sean Lock….(‘s tour manager) for posting an illustration that spoiled a key joke in his 2013 comedy tour. I wrote a review of Sean Lock’s Derby show for the Derby cultural blog, A Clockwork Orrery and drew this image of Sean as a backwards centaur to accompany it.

To be fair Sean Lock did ask for no photos to be taken during the show. I assumed it was a bit like a court room where photography is banned but drawings are allowed.

A few days after the review was published I received a very polite email asking me to remove the illustration as it was spoiling a joke in his tour. Horrified that I may have annoyed Sean Lock in some way, the centaur image was quickly replaced with a cropped version. Damon, Sean’s tour manager, was very nice and forgiving and said he would post me a copy of Sean Lock’s show when it was released on DVD…and he did! 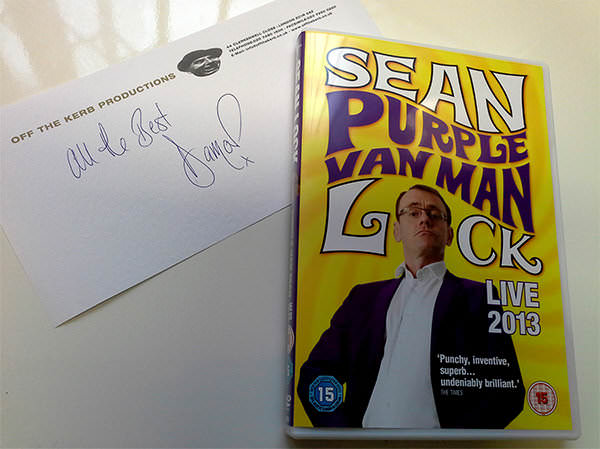 Now that is out on DVD I can share the full illustration publicly. You can see the show with the centaur joke for yourself in the DVD Sean Lock: Purple Van Man.