This science outreach animation about mucus was commissioned by scientific researchers at KTH Royal Institute of Technology in Sweden and MIT in the USA with the MRS Foundation. They research biomaterials, specifically the application of mucus in new technologies. The animation was created to share with school students to raise interest in the science and research. This animation was an incredible amount of fun to work on! Not only because we made jokes about snot but the artwork was a blast to design and animate and the whole process was a fascinating experience to help scientists share their research work and knowledge with the public.

At the start we all agreed that the animation should be lively, cartoonish, fun and humorous. So we started with a mood board of cartoon references with some initial character designs. Our greatest sources of inspiration were “Dumb ways to die” and “Ren & Stimpy”. The bean shaped character was selected and we then began script writing in conjunction with the researchers Thomas and Julia. 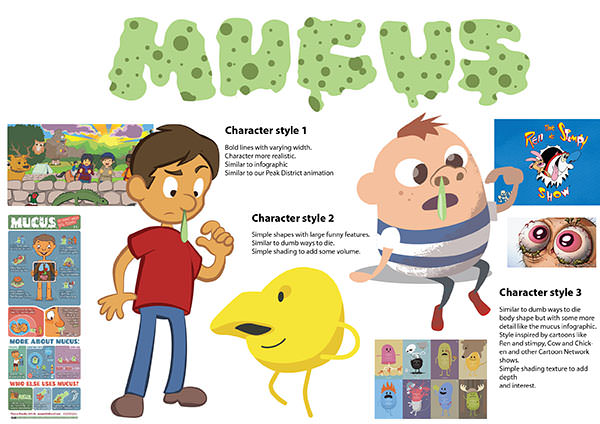 Once the script was outlined, we began sketching the storyboard frames in Toonboom Storyboard. We worked to illustrate scientific explanations with fun and easy to comprehend visual metaphors. Thomas and Julia worked closely with us to ensure the animation story remained scientifically accurate as we created visuals. 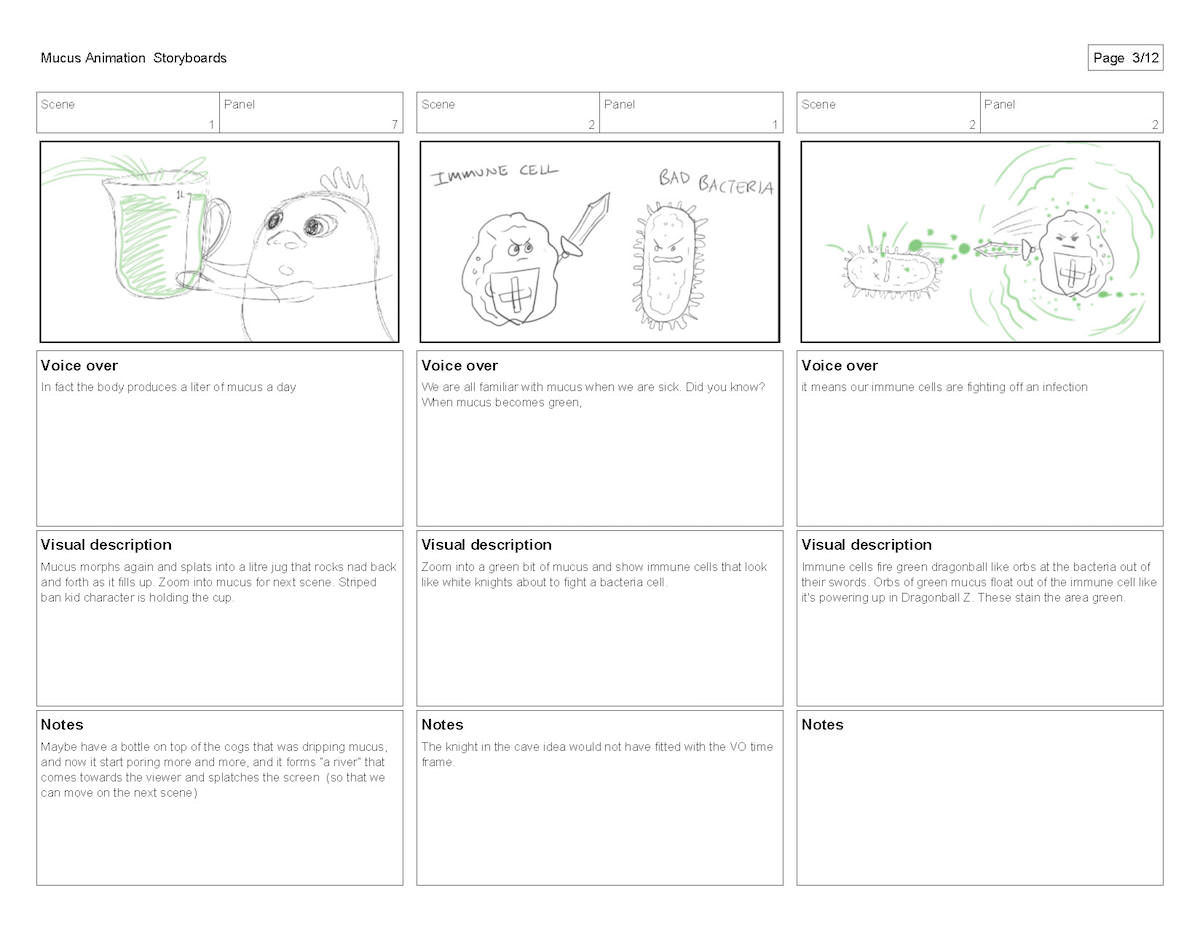 When the storyboard was approved, we began illustrating all the characters, mucus and other assets for the animation. These were created in Adobe Illustrator with a 22inch Wacom Cintiq. The Wacom Cintiq speeds up the illustration process as drawing feels more natural and intuitive with pen to screen. We shared the completed assets as JPEG stills with the researchers and made revisions before we began animating. As we were illustrating the assets, Ritchie was recording the voiceover narration in preparation for when we animate.

The assets were created in Adobe Illustrator so were easily imported as layered compositions into After Effects. We created a composition for each scene and designed transitions between scenes as we animated. We used the After effects plug in scripts Explode Shape layers and Duik. Duik was used for some simple character rigging. Explode Shape layers enabled us to edit and animate the paths of imported vector artwork from Illustrator with After Effects. This was especially useful when animating the mucus.

Once we had the first draft of the animation complete, our music producer began talking with the researchers about a soundtrack. Thomas and Julia requested something happy and upbeat. Ben then composed and produced the music using the software Logic Pro. Ben also added fun, squelchy sound effects to the animation to emphasise all the motions.

The researchers gave us feedback on the first animation draft and we made minor revisions to timing and the motion of some particles and bacteria. Then Ben synced the music track and mixed the voiceover to finish the project off.

I worked with Mair over several months to produce a 2 minute science outreach animation about mucus. Mair clearly laid out the different phases of project and their cost. She was very inclusive in the creative process, making requested changes rapidly. It was nice to feel her excited and invested in the project. Communicating with Mair has also been a pleasure. This project was managed only via email, which is a feat in itself given that it involved collaborators in Sweden, the UK, and the USA. In short, I highly recommend Mair for your animation projects.