2014 has been a busy and fantastic year. Here’s a little collage timeline I put together to summarise it. 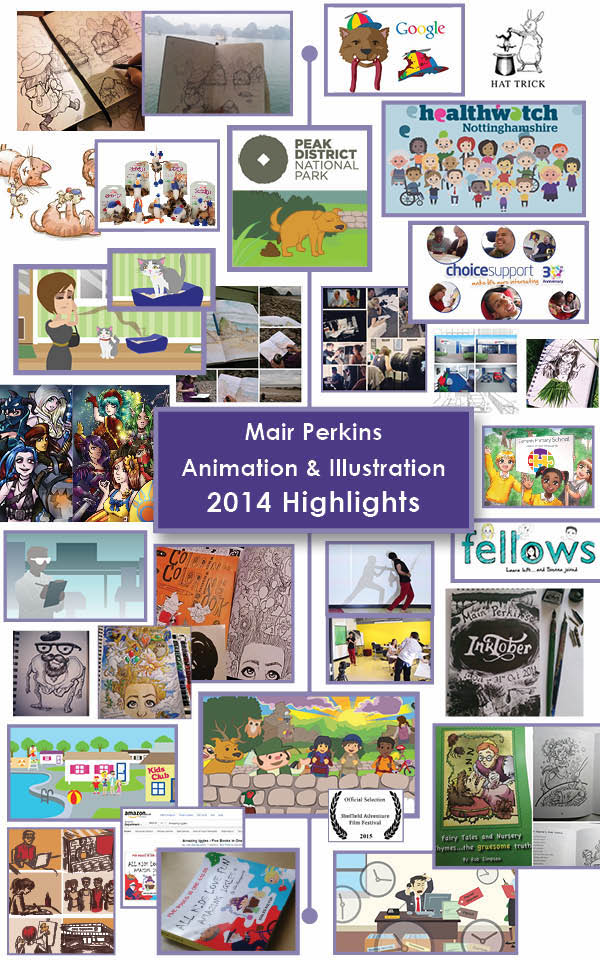 The year started with a trip to Vietnam (Ha Long Bay sketch) and a comedy sketch animation about Google for Hat Trick productions.

In February and March I animated for Healthwatch Nottinghamshire, the disability charity Choice Support and Pedigree’s LitterLockerII (which included a cat pooing). Around this time I also put in a bid for the Peak District animation tender.

In spring I illustrated some cat toy packaging, some interior design concepts for a car showroom and produced my most complicated anime style illustration commission yet (The League of Legends groups).

In summer we began work on the Peak District animation and had the joy of animating a dog pooing. Around this time I also began illustrating 3 different children’s book projects. A trip to Wales was also squeezed in where I took some time out to painted the stunning Pembrokeshire coastline.

AVP – All Video Productions filmed some footage for a promo video for the animation side of my business. Though I’m afraid I’m still in the process of making this! I’ve been so fortunate to have so much client work that I struggle to find time to work on my own business’s projects. This will be completed in 2015 though!

In August I worked with a Leicester based performing artist on a projection mapped manga inspired dance project. We used the green screens in QUAD – Derby to experiment with the choreography and projected animations. This was the research and development phase but if all goes well, we’ll begin the performance production in 2015.

In the last half of 2014 I created animations for Fellows and Associates, Thermo Scientific, SMI Staff.Care and Siblu Holidays. The Peak District National Park Authority’s animation also went live and received a great response. It’s going to be screened at Sheffield Adventure Film Festival and Five Lamps Films in 2015.

I’d also like to thank Haynes Music Productions and QuimbyCo for their musical and animation collaboration on various projects throughout the year. The Peak District animation was an amazing team effort!

October become INKtober and was a brilliant exercise for personal artwork.

One of my personal bits of artwork “Keep your head in the clouds” was featured in Doodlers Anonymous.

November and December saw my illustration efforts from the summer being printed. I had the privilege of working with two wonderful children’s book authors; John Benneyworth and Rob Simpson. You can now order “Amazing Iggles” from Amazon or contact Rob Simpson for a copy of “Fairytales and Nursery Rhymes … the gruesome truth”

One of my last pieces of work for 2014 were illustrations for Creative Beeston. Keep an eye out for them in 2015.

I’m returning to work on the 5th January to work on animations for a heritage site in Cambridgeshire, The NUS and a Nottingham based small business plus the second book of Amazing Iggles.

A huge amount of thanks is owed to my clients, followers, family, friends, partner and cats for a happy and prosperous 2014. I wish everyone a 2015 filled with happiness and success!